I in the Other 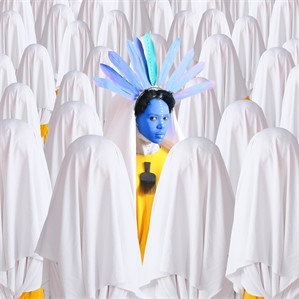 
Photograph
Marie-Louise and Samuel R. Rosenthal Fund
2019.014
AÃ¯da Muluneh was born in Ethiopia but left at a young age, first to Yemen, then to England, Canada, and the United States, where she graduated from Howard University in Washington, D.C. She worked as a photojournalist for the Washington Post before returning to Ethiopia, where she is now based. She has said that she wants to change the way Africa is consumed, to âmake it digestible in a different way,â rather than via its typical reductions to wildlife, famine, and war. The stereotypes of Africa and âAfricanâ are alternatively beautiful and exotic or ugly and hopeless depending on the agenda of the colonialist gaze being cast over it.

What acceptable forms does African beauty take? What contemptible shapes encapsulates African hopelessness?
Muluneh, deploying both an editorial and artistic eye, interrogates the desire to capture Africa in a nut shell: a painted scarified face, a vibrant bolt of cloth, one moment in time.

She has become an activist in her art and practice, supporting education and creating outlets and opportunities in Africa for young photographers, including the biennial Addis Foto Fest, to generate first-person perspectives of Ethiopia from the inside.

Let Yourself Continue: The Body

Your current search criteria is: Objects is "I in the Other".