Cleaning up - the waste collector 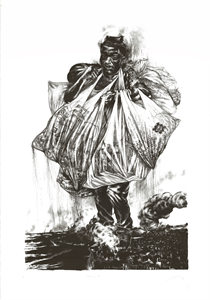 "An informal industry of waste collectors or gleaners has developed in cities like Johannesburg where unemployed people collect selected materials, either plastics or metal or paper to sell back to recycling centres. This has resulted in a subculture of strange adornments and carts which are used to hold and transport the daysâ finds. This part maniÃ¨re noire stone lithograph was based on a photo I took in downtown Joburg near my studio, of a man carrying an inordinate about of bags full of waste many of which were slung around and tied to his body.

In this lithograph this figure attains gigantic proportions towering over the city he moves through, the bags of waste contents hinting at colonial baggage and recyclable ideas imposed by generations of western imposition: churches, laws, the heads of the disposable bodies and lives, the by-product of these systems."

Your current search criteria is: Objects is "Cleaning up - the waste collector".