The boy who cried wolf 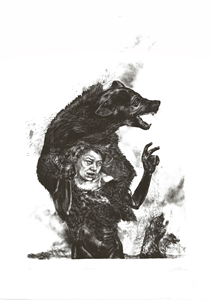 "This diptych consists of human and animal hybrids, making reference to both thereonthropic and Christian imagery in a contemporary context. The two lithographs are intended to work as a pair but function as individual works too.

Therianthropy is the mythological belief in the ability of humans to metamorphosize into animals resulting in a being that amalgamates aspects of both creatures, becoming a hybrid. This notion was often explored in Greek mythologies.

The Therianthrope was believed to acquire the character, mannerisms or physicality of animals within a shamanic state of transcendence. Depictions of this transcendence exist from Paleolithic times [cave depictions in southern France] to more recent San bushman painting in rock overhangs in southern Africa and in Aboriginal art from Australia.

Therianthropic hybridity between man and animal is an old human fantasy linked to multiple mythologies featured in most ancient cultures and early belief systems and is often linked to tales of morality or disobedience.

Human fascination in this animal/man hybrid continued beyond ancient belief systems, infiltrating the mythologies of countless cultures. Returning early explorers thrilled their audiences with tales of dog-headed men and other oddities inhabiting the outer reaches of their known worlds and imaginations, [Pliny the elder and later John Mandeville wrote of the fictitious dog-headed race [the cynocphany] of Nacumeria. During the reformation bestial head swops were used to demonize and ridicule religious opponents [both catholic and protestant ]. This form of caricature continues into contemporary political cartooning as an attempt to detract, disempower and mock opponents. Bestial hybrids continue to hold our imaginations and infiltrate our contemporary subcultures modified for public consumption through entertainment and escapism in literature, plays, film and in contemporary gaming worlds where they emerge as part of our subcultural panacea [wolverine, Spiderman, the list is long]

These works also engage with notions of camouflage and disguise as a prelude to predatory acts. Things are not what they seem, and our predatory aggressive behaviors are often driven by unsuspected motives. We have been taught to be fearful of that which is hidden or disguised.

Fear mongering has long been a common human practice and at present with the pandemic, even more so. Not that some issues are without warrant and that caution needs to be exercised, however excessive fear can be debilitating and tends to numb reaction times. Fear mongering can be used as an instrument of control, power or to sew uncertainty and division.

The boy who cried wolf is an old folk tale warning us of the dangers of making false alarms. To âcry wolfâ is to give false warning or even false hope. In a time of âalternative truthsâ and misinformation, the risk arises that when real trouble appears so much emotional energy has been expended on false statements that a sense of apathy ensues leading to greater danger. The increasing dependence on anti-depressants, anti-anxiety and calming medications results in a numbing of natural reactions to danger and fear. Society is thus less prepared or able to deal with a real crisis or to perceive the danger. In the boy who cried wolf, the figure of a youth cloaked by the skin of the hyena emerges almost playfully from the deception, as if part of a childrenâs game of truth or dare. Yet one is aware of the almost animalistic attraction of the beauty of youth. Here the hand gesture reminds the viewer of the gesture of the Christ child as depicted in religious paintings. Two fingers raised in a seeming act of blessing resemble a form that is visually similar to that of an aggressive animal claw â the strong profile of the hyena and its anthropomorphized limb dominate the initial reading of the image allowing for an ambiguous reading of the scene.


The second lithograph, The goat that led the flock, continues the theme of religious and secular imagery combined with that of the therianthrope. Goats (although domesticated herd animals) do not have as positive a connotation as sheep do within western society. Often In slaughterhouses it was common to use a goat to lead an unsuspecting group of sheep into the slaughter pens, keeping them calm, after which the goat would be released and reused in its role again. Thus a certain amount of trickery is employed.

In the image, below the goat head, the arm that points references the arm of the John the Baptist who traditionally points the way to the Christ in religious paintings. The Baptist is often depicted dressed in rough animal hide (as a textural difference to the smoother refined depiction of the Christ figure), but here the figure is camouflaged in a organic woven dress similar to the raffia and leaf fabrics worn by dancers in the costumed ceremonial dances from Northern and Western Africa (Burkina Faso etc.). These dancers typically employ animal masks [evoking forest spirits] as part of their camouflage and deception. In nature, pattern appears in the coats of wild animals as a form of concealment allowing for protection or even predation. In ritual performance, animal pattern is mimicked and adopted/adapted into the costumes of the dancers.


Hidden within the textured garment a figure confronts the viewer through what resembles a hooded balaclava, a garment often associated with criminal or covert activity. In place of the traditional cross or staff held by John the Baptist, the figure holds a sjambok, a local whip made of leather and rubber often used for the herding of livestock, crowd control, and more commonly now (as seen in the city streets of Johannesburg, South Africa, where I work) used by security guards to control public movement and to protect drivers, caught in traffic, from criminal elements waiting to prey on unsuspecting motorists. The sjambok becomes a rod to persuade the public (flock) to behave and follow and not deviate from what is expected.

Religious beliefs traditionally offered moral guidance and direction during times of stress when confusion and disinformation abounded. Today, because of the technological age in which we live, we look to other forms of guidance on social media, the internet and through hearsay. As in the past, false alarms and deception are part of our contemporary currency, human nature does not change, and one needs to be more wary and critical of the falsehoods and misinformation posing as truths and guidance.

These two works serve to remind the viewer to take care of what you allow yourself to believe in or are seduced by and to be aware of the falsehoods, fake news and misinformation that is peddled as truth and used as a means to control, persuade or intimidate."

Exhibition List
This object was included in the following exhibitions:
Provenance History
Related Siblings(s) Click a record to view

The goat who led the flock
2021.032
Portfolio List Click a portfolio name to view all the objects in that portfolio
This object is a member of the following portfolios:

Your current search criteria is: Objects is "The boy who cried wolf".