Taken for a ride 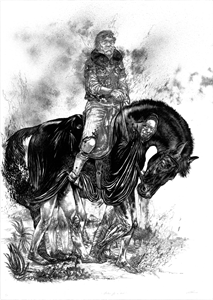 "This is a stone litho made at Le atelier le grand village in 2019. This work is a parody on the post-colonial safari into Africa [the darkest] and on the institution of the grand tour, a well established social ritual for the wealthy and bored to make excursions into the unknown to elevate their ennui and inform themselves of the âotherâ in its natural state.

The wealthy westerner who makes a tourist venture into the unknown to see exotic peoples and natural curiosities beyond his civilized boundaries. To see different lands and peoples, which he would consider his inferiors but worthy of observing.

With wealth to flaunt and determined to affirm his status these travelers were often carried by the local population sometimes in a litter, a sedan chair, a palanquin, or on the backs of local inhabitants, thus ensuring the tourist would not risk getting there feet wet or dirty and could see the sights in leisure.

In this work, a crippled tourist poses astride a strange and exotic creature. He has come prepared, wearing his best floral shirt, travel pillow and a sleep mask, thus armed he is ready to capture the sights- to see what should be seen as informed by the guide book and in doing so to up his rankings on social media.

Despite being crippled he sits erect maintaining an air of prowess yet needing to be carried he has been planted on the back of an animal, some constructed prop or hobby horse -but this is no normal hobby horse it has far too, many legs. Perhaps it is some pantomime beast or a masked creature escaped from a masquerade dance and perhaps he is ignorant of his ride.

The tourist seems not to have noticed that his mount is not as it seems, he looks proudly at the viewer, lording over his surrounding unaware that the animal or construct that carries him is camouflaged disguising it's real content and perhaps will be taking him for a ride he did not bargain on having.

To be taken for a ride implies being conned or deceived of not fully understanding a situation you are part of. Believing to be in a position of power or superiority over which the rider has no control when in actual fact the legs under you are not what you perceived them to beâ. A joy ride with unexpected outcomes.

Taken for a ride has other implications, third world economies promised support and upliftment by western colonial powers were taken for a different ride, undeveloped countries stripped of there mineral and natural and human resources before being aware of the inherent wealth they held. Promised one thing â development yet receiving another â exploitation. the metaphor of the joy ride explores both sides of this relationship."

Your current search criteria is: Objects is "Taken for a ride".