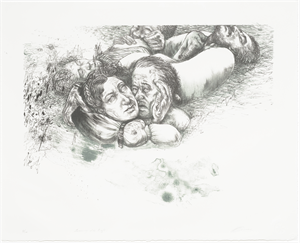 "This stone lithograph was made as a response to the humanitarian crisis of the migrant crossings occurring in the Mediterranean and landing at times on French shores. The portraits in the lithograph are a composite of references taken from current media photos of refugees in stricken boats and floating in life preservation devices.

The work has a small reference to Gericault's archetypal âThe Raft of the Medusaâ, which attempted to memorialise the horrors of the wrecking and survival of a tiny number of the crew of the French frigate, the Medusa. In the lithograph, one of the smaller portraits of an exhausted or dead refugee takes its reference from a figure in Gericaultâs original painting."

Your current search criteria is: Objects is "Leaving the raft".