The Life of Toussaint L'Ouverture 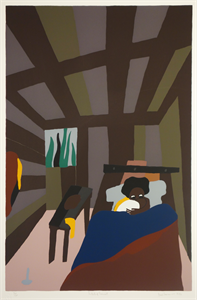 
Print
Creation Place: North America, United States
Marie-Louise and Samuel R. Rosenthal Fund
2020.056-068, 2021.054
The Grinnell College Museum of Art has 14 prints from a total of 15 created by Lawrence between 1986 and 1997 that depict scenes from the life of Toussaint LâOuverture, the former slave who became a leader in the Haitian Revolution, the only successful slave rebellion in history to result in the founding of a new country, the Republic of Haiti, in 1804.

The prints themselves are based on a series of paintings first produced by Jacob Lawrence between 1936 and 1938, the first series of his career based on a single subject. He chose to depict the life of LâOuverture due to the absence of important Black leaders in the history books he had read in school. He produced 41 paintings in the original series in 1938, when he was 21 years of age. The paintings are now preserved in the Amistad Research Center, Tulane University, New Orleans.

Additional Images Click an image to view a larger version

Contemplation
2021.054
Portfolio List Click a portfolio name to view all the objects in that portfolio
This object is a member of the following portfolios:

Your current search criteria is: Objects is "The Life of Toussaint L'Ouverture".