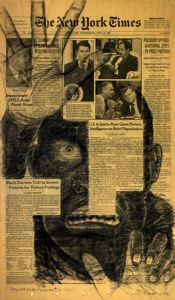 THEN: 1986
From her beginning, Adrian Piper, self-defined first-generation Conceptual artist and analytic philosopher, intentionally challenged White viewers to confront intimate and institutionalized racism. âVanilla Nightmare #14â is one in a series of charcoal illustrations drawn on the upscale New York Times front pages. A black male drawn on / trapped behind news thought fit to print confronts, rather than confirms, Euro-American definitions of black masculinity. Blackness is a white invention, therefore the satisfaction of recognition and reciprocity will remain absent in the presence of Racism, a violent and lethal disease that disproportionately still affects Black people.

NOW: 2019
Standing in front of âVanilla Nightmare #14â, we are ALL viewers forced to confront the persistence of deeply rooted racism and fear of the Other. Here stands a terrorized Black man with bulging eye and twisted mouth*, hands raised against a wall / fingers around bars, the single eye refusing the gaze of the viewer.

To survive and surpass the resurgence of racism and public articulation of hate, we should heed a caution from Adrian Piper: âIf you must think about your racialized experiences, then steel yourself psychologically and emotionally, write them up, and put them out in whatever form circumstances demand which relieves you of the burden of having to carry these experiences around in your mind and minimizes the psychological and spiritual damage they do to you.â

Your current search criteria is: Portfolio is "American Studies".